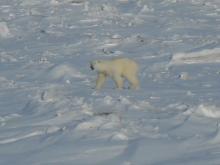 Hunting the majestic polar bear is probably one of the most unique and prestigious trophy hunting experiences available today. An Inuvialuit guide will take the client out on the sea ice and conduct the hunt in the traditional manner using a dog team and sled. These hunts are steeped in adventure, pitting the expertise and knowledge of the guide and the hunter against the harsh natural elements of wind and cold, and finally against the survival instinct of the mighty Polar Bear.

The Inuvialuit guide will establish his base camp on the ice of the Beaufort Sea choosing a site between Pollen Island, west of Tuktoyaktuk, and the mouth of the Horton River, two hundred miles east of Tuktoyaktuk. The hunt for polar bear must be conducted by dog team, although the guide may have snowmobiles in camp.

Our polar bear hunts are often demanding and not for the weak fo heart. Weather conditions are unpredictable and frequently severe. Travel to the camp prior to the hunt and back to Tuktoyaktuk after the hunt is done by snowmobile may consist of up to two traveling days. We want to emphasize enough that traveling over the snow by snowmobile is most often physically very demanding. It is very important that the client is able to endure long hours in cold weather traveling over hard snowdrifts.